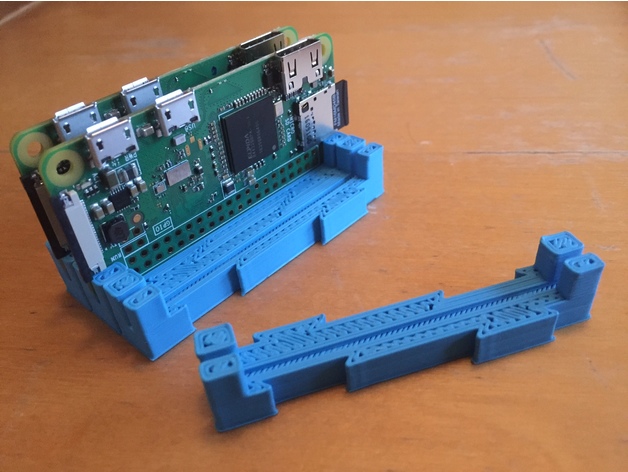 Pictured: My Raspberry Pi Zero W stand/rack. Get it on Thingiverse

What’s this all about?

To use the information here, you will need a Micro SD card, a full size adapter and an SD card USB drive, and of course, a Rasberry Pi Zero W.

Raspberry Pi Zero W is a small, powerful and connected (onboard Wifi and Bluetooth) computer. It’s the only Raspberry Pi that’s really caught my attention, including the original ‘unconnected’ Pi Zero.

It’s small; not much bigger than a NodeMCU ESP8266 Wifi board, but the Pi Zero W also offers Bluetooth as well as better processor, RAM and storage resources.

It’s cheap; just launched but only 9GBP. It will give ESP32 something to think on, a board which also has Wifi and Bluetooth, but to buy in a developer friendly form, ‘currently’ costs a bit more.

It’s available; in the week it launched I ordered one, and I had it in my hands 2 days later. This makes it a strong contender in the space C.H.I.P has positioned for itself, which, though arguably a better board with 4GB of onboard storage, is in very short supply.

It runs Linux; so, much of the stuff I do day-to-day is portable to the Pi Zero W.

It runs Go; Go compiles for lots of platforms, but STM32 architectures are not supported - the binaries are too big. So I can’t use Go on ESP8266 boards, and I have no clue about programming in C. Fortunately for me, Go cross compiles to the Pi Zero W ARM architecture, just fine.

I’m shooting for a “headless” setup. No screen and no monitor or other peripherals. I want to access my Pi Zero W like I do servers - over SSH.

You can connect a monitor and keyboard initially to configure everything, but since I don’t have either spare, I’m doing it without.

What follows is my set-up process, end to end. You should be able to follow it verbatim.

I didn’t know some of this information initially, I used a couple of web resources myself in piecing it together. I’ve provided links to these resources where relevant.

We need a blank Micro SD card and adapter. And 8GB card seems to be the minimum requirement.

For a headless configuration we don’t need the Pixel GUI/desktop that bundles with the full image, so we can grab the smaller ‘lite’ image. At time of writing latest was ‘Jessie’.

Run this command in Terminal, prefix with sudo if you need to:

Plug the Micro SD card into the adapter and insert it into your SD card slot. Run the same command again. You should see an additional line in the output:

The additional line is your Micro SD card.

Next, we’ll unmount it, ready for flashing.

In Terminal, change directory to where you have the downloaded Raspbian Jessie Lite image, which for me was Downloads:

Use the dd command to copy the image to the Micro SD card. Note our use of rdisk2 rather than disk2. This means ‘raw disk’ and is supposed to be faster.

You’ll loose your Terminal prompt. Wait for the process to complete.

We now have a bootable Micro SD card.

We could stick it in the Pi Zero W and boot it right away, but this wouldn’t do us much good. With no keyboard or monitor, nor any network connectivity we can’t interact with it yet.

EDIT: 05/12/2017. There are a couple of useful comments at the bottom of this post which suggest the process I describe next, including the need to create a virtual machine later on, can be simplified in general, and especially for Mac users on later versions of OS X. I haven’t had the opportunity to try for myself, but I’d encourage you to check that information out also.

The Raspbian image comprises two sub-partitions; a boot partition which is formatted as FAT32 and the file system partition, of type LINUX.

If we mount and inspect the SD card in our Mac’s Finder, we can only access the BOOT sub-partition. The LINUX filesystem partition is EXT4 format and our Mac Finder can’t see/use it.

We can’t mount the sub-partition in Terminal either on Mac, so we need to use Linux.

A virtual machine is convenient here.

On Mac, an easy way to create a Linux virtual machine is via Vagrant and VirtualBox, and I mostly used this guide, by Jeff Geerling for this part of the process.

Install Vagrant, which will install the VirtualBox dependency.

Launch VirtualBox, find the virtual machine and discard the saved state (via the right click option). We need to do this so that we can enable USB.

Check in Mac Finder that the card has not been mounted. If it has, unmount it.

Start the virtual machine from within VirtualBox and login as the vagrant user:

If it is not selectable, double check in Finder that it has not been mounted.

Key the following in the virtual machine’s Terminal prompt.

This should identify both sub-partitions on the Micro SD card.

Mount the Linux sub-partition and change into this directory.

The next step is to configure Wifi, so that when booted our Pi Zero W will connect to a network.

I typically operate between two Wifi access points, so I have set up both in the configuration below.

Maybe you only need to connect to one access point? I’d still recommend the configuration below, since it’s extensible - there if/when you need it.

Key Ctrl+x to confirm and save.

We need to make amendments to etc/network/interfaces also.

The defaults in here need to be amended for multiple access points and roaming between them.

Again this is my configuration, but a redundant config for a second unused access point should not hurt you - and you may need it later.

Next, we need to make a single amend to the first boot partition of the Micro SD card, since by default the SSH service is not enabled on Pi Zero.

So we’ll create an empty file named SSH with no extension. This is deleted at first boot, but SSH is subsequently enabled.

Insert the Micro SD card into your Pi Zero W and power it up. If all went well you’ll connect to an access point. If you configured a second access point, when you go to your second location you’ll automatically connect to that access point too.

Hopefully, it should be evident how to add a third access point (or more) if needed.

Now we have networking we can connect to the Pi Zero W itself over SSH.

You can find the IP address of the Pi Zero W by logging into your router and looking at the list of attached devices.

Alternatively, many routers with DHCP allocate an IP and expose the Pi Zero on the hostname raspberrypi.local

In Terminal, let’s try connect to it.

The default user is pi the default password is raspberry

Default passwords are never good. Let’s sort, for both the root and pi users, by changing them.

Update and upgrade Raspbian, this takes a few minutes to complete. Hit y in response to any prompts.

Next we’re going to set up SSH passwordless login. This is done by transferring our public key from our Mac to a special location on the Pi Zero W.

If you’re a developer, it’s very likely you’ll have a private/public key pair already on your Mac, but if not, you’ll need to create one.

On your Pi Zero W create the following folder in your home directory.
Then set the permissions.

Create the authorized_keys file, and copy over your public key. You need to copy the contents of ~/.ssh/id_rsa.pub into this file.
Then set the permissions.

Open a new Terminal window - !! do not close the current window !!

This time we should log straight in to our Pi Zero W without being prompted for a password.

Finally, we will increase security by disabling all SSH password logins, the root user login, and restricting use of the SSH service to only the user pi.

Add, or amend, the following lines in this file.

Last step was a bit intense. Step 5 is nice and easy. We’re going to install and set up a Firewall, through which we can block port access to our Pi Zero W.

We’re going to install and use UFW (Uncomplicated Firewall). This application provides a super easy abstraction to iptables, an application which, personally speaking, I’ve often struggled with.

Now we need to set some rules.

I’ll probably use my Pi Zero W as a webserver, maybe also as a client to consume API services, so I need HTTP and HTTPS, so I need to open ports 80 and 443.

I also use Sendgrid to relay server email, and that works on port 587.

Obviously I’ll be using SSH to login in, and by default that uses port 22.

We’re firewalled. Feels good yes?
At this point our setup is fairly robust. I think so anyway.
But we can do more to make using Pi Zero W a lovely experience.

I bet you, like me, have more than one Raspberry Pi Zero W - or will have soon!

But, if we’re going to use more than one Pi Zero W on the same Wifi network, we have a small problem.

Unless we want to keep identifying them by IP address, which means checking the router’s attached device list, we need a way to tell them apart, as, by default, they all have the hostname of raspberrypi, addressed as raspberrypi.local over SSH.

This is not useful. So let’s change it - it’s simple.

Replace the raspberrypi value in this file with the name you want. There are restrictions on what hostname can be, but I name/number mine like this.

Next edit this file.

Change the last line to match the entry you placed in the /etc/hostname file.

Repeat for all your pi zero w boards, and each will be separately identifiable and addressable on your Wifi network.

Step 6. Creating an image of your work

We can’t go through this long process - as much fun as it was :/ - every time we want to configure a new Raspberry Pi Zero W, so in this final step we’re going to create an image file of everything we’ve done so far.

This image will give us a snapshot of the Operating System and File System, exactly as it is now. One that we can use, in place of the default Raspbian image, when we get another Pi Zero W and need an OS for it.

With an image, our next setup will just comprise of two simple steps!.

1) We’ll just need to copy the image to a new Micro SD card as we did in Step 1, and then;

Everything else including Wifi, SSH passwordless login and Firewall will be preconfigured out-the-box

To create the image we use the DD command from the Mac Terminal application. We unmount the Micro SD card first.

This creates the image file 060317.img in the folder pi relative to the our current working directory.

To copy this image to a new Micro SD card for use in another Pi Zero W, we use the DD command again and simply reverse the parameters such that the source is pi/060317.img and the destination /dev/rdisk2.

Configuring a Raspberry Pi Zero W from this image is now effortless.

I’ve worked back through this process a couple of times now. I’ve had a few issues, which I’ve listed here as a heads up.